The Blackstone Tjanpi weavers are a group of Aboriginal women from 23 different indigenous communities in Western Australia.
Identify the main characteristics of their artmaking practice as represented in the images below.

This question asks you to ‘identify’ the main characteristics. Note that this is plural, it doesn’t say how many, but certainly you need to be able to identify more than one.

‘Identify’ in it’s simplest reading means to name or point out.

Collectively, the first clue identified in our lesson on unpacking strategies, was that the women are from 23 different communities in Western Australia and the logical inference to draw from this is that to work together, they have to travel. And since ‘practice/artmaking practice’ as separate from ‘material practice’  involves the sum of everything the artist does to sustain and enable their work, which includes their ‘material practice’, then traveling is a characteristic of their artmaking practice.
The second characteristic identified in the lesson was the use of traditional / natural materials, ( grass and raffia) and non traditional materials (discarded car frame).
A third was ‘collaborative practice’ as differentiated by the work of an individual member of the group in Plate 2.

Other inferences and summations were;

An awareness of Contemporary practice, appropriation of a discarded car frame to make a non utilitarian artwork as opposed to the utilitarian application of materials in traditional basket making practice.
An acute sense of irony conveyed through the juxtaposition of a functional basket; which in a traditional setting, would be used for gathering and carrying food etc and the use of a discarded car frame. A car can also be used to gather and carry things, including food; and wrapping the discarded frame, (throw-away) using traditional materials and techniques to produce a non functional ‘auto-basket’ was seen as very ironic and possibly conveying comment/critique about consumer society and the increasing usage of ‘throw away’ / ‘disposable’ goods in a culture that once wasted nothing.

On their website the work is titled “Tjanpi Toyota Dreaming” not the title given in the HSC paper.
Materials quoted are raffia, grass, jute string, chicken wire and steel. The women are from 28 different communities not 23 as referenced in the paper. 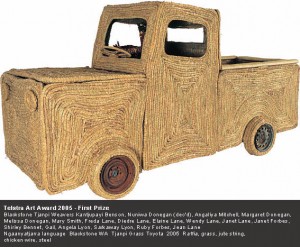 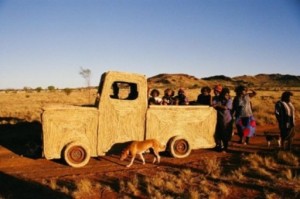 Question 1b“Explain how Jeffrey Smart and Glen Murcutt have responded to the world around them in these artworks.”
Source material: two images and the following citations.

Plate 3: Jeffery Smart, born 1921, Australia, living in Italy. Morning, Yarragon siding,  1982-4, Oil on canvas, 100×134 cm.Smart painted this picture from a photograph he took of a railway station while traveling in country Victoria. A siding is a section of track off the main railway line. It is used for loading, unloading and storing trains.

Explain: reference cause and effect

Remember we discussed experiences that were pretty common to all….the time you are called to account for X. Common examples thrown around were when you were young and your parents would drag you in to EXPLAIN how ‘this’ happened. And you had to do the cause and effect routine…”well mum, James was running through the house and Mary was levitating the dog in the lounge-room, I was at the kitchen table with a big bowl of blue icing for the cake, James tripped on the mat and he flew up into the air and hit the dog which went spinning through the door, bounced off the fridge and landed in the icing. And then the dog went running down the hall, ‘cause James blamed it and chased it for tripping him, ‘cause he said if he hadn’t been looking at it floating in the air he would he would have seen the mat and then the dog jumped all over your your bed ‘cause its head was all fuzzed up, see, it wasn’t my fault at all.”

In this explanation you have to be mindful that a painter (Smart) and an architect (Murcutt) have very different sensibilities at work and that the ‘world around them’ can constitute significantly different things. An architect will be dealing with form, space, functionality, design, efficiency, materials, environment, client demands etc. A painter will be dealing with formal relationships of principals and elements, composition, content and the inherent qualities of the material being used, e.g., oil, acrylic, watercolour etc and the idiosyncrasies of their own practice.

In discussion the collective wisdom identified the following;

Some other points brought up in discussion were;