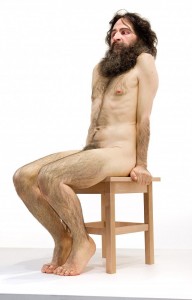 Resonant with the uncanny impression of human presence, Ron Mueck’s hyperreal sculptures provoke a queasy fascination in the viewer. Their porous, synthetic skins are painstakingly embedded with details like body hair, fingernails and sweat. However, their unnatural scale offsets the familiarity of the ordinary bodies on show—miniature or gigantic, they possess an otherworldliness that unsettles and enthralls. Simultaneously grand and vulgar, nestled somewhere between fine art and artisan traditions, Mueck’s sculptures have drawn on canonical art historical sources while echoing the ‘low’ history of wax’s all-too-real simulation of the human body.

This contradiction is reflected in Mueck’s background—the son of German toymakers in Australia, he crossed into contemporary art after a career in puppetry and special effects (he worked with Jim Henson on Sesame Street, the Muppet Show and Labyrinth) with the Charles Saatchi-commissioned Dead Dad, which was included in the influential exhibition Sensation: Young British Artists from the Saatchi Collection. An exhibition at the National Gallery of Victoria, Australia, is currently showing Dead Dad, other well-known works, and some new works on show for the first time.